Major oil stocks like ExxonMobil are reaching extremes on a fundamental, technical, and comparative basis. Time to short crude in a non-crude way.

The huge rally in ExxonMobil (XOM) and the other major oil players looks to be burning a little too hot lately. ExxonMobil (XOM) is the largest component in the Energy ETF (NYSE:XLE). It comprises over 23% of the overall weighting, so let’s use that as the poster child for big oil.

Certainly, XOM has been on a major bull run over the past year. Shares of ExxonMobil are now up over 50% so far in 2022 as they once again reached fresh new highs at $99.09.

That is well above the average analyst price target of $80.73. Besides the analysts, here are 5 really good reasons XOM and other big oil stocks like Chevron (CVX) are due for a drop.

Despite trading at all-time highs, XOM remains just a C Rated stock – Neutral – in the POWR ratings. It also ranks near the bottom in the Industry Group. Not a glowing endorsement for further gains.

If not for the A Component grade in Momentum, ExxonMobil may very likely be a selling stock. Value and Sentiment both carry a D Grade. 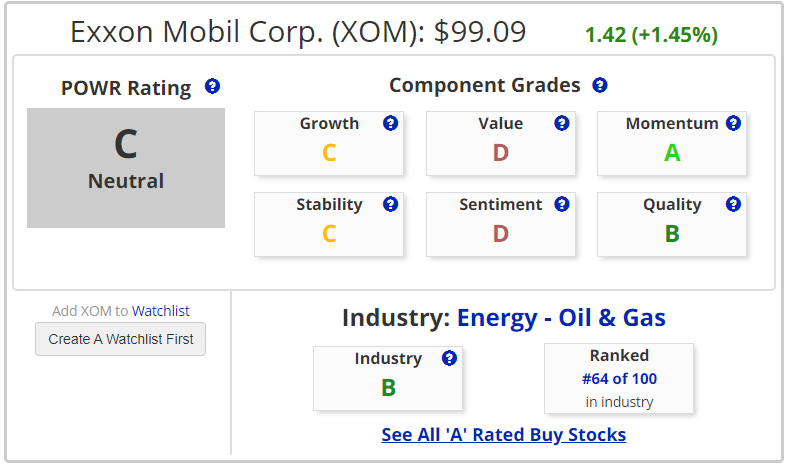 Once the momentum breaks, look for XOM stock to start to head lower as profit taking begins to take over.

The latest leg in a recent rally in ExxonMobil has been driven to a large extent by a multiple expansion. Price/Sales (P/S) for XOM stock now stands at nearly 1.4 x and is approaching the loftiest levels in the past year. It is also well above the median of 1.08 over the past decade.

The last time XOM stock traded at 1.4x P/S was last June which marked a significant short-term top in ExxonMobil stock. Without further multiple expansion XOM stock may likely stall out and begin to go in reverse.

ExxonMobil has gotten to overbought reading from a technical analysis perspective. 9-day RSI is above 70. MACD hit a recent high but has started to soften. Bollinger Percent B got to over 100 but has since fallen back. Shares are trading at a big premium to the widely followed 20-day moving average.

Previous times all these indicators aligned in a similar fashion marked at short term top in XOM stock.

XOM stock is nearing a historically tough stretch. July and August have been by far the two worst performing months for ExxonMobil over the past decade. Shares have lost over 3% on average in both July and August and have shown gains in only 1 of those 10 years. 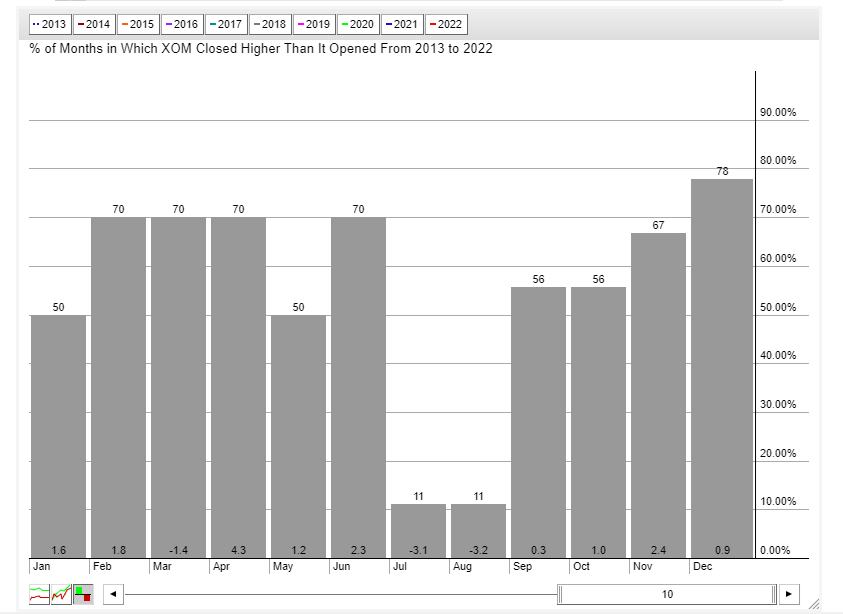 History may not repeat itself, but it does rhyme to quote Mark Twain. Look for seasonality to be strong headwind for XOM stock over the summer months.

ExxonMobil has been a massive out-performer to the overall market since the beginning of the year. XOM is up over 50% in that time frame with SPY falling nearly 15%. Normally XOM and SPY tend to be fairly well correlated as seen in the first half of the chart.

Trees don’t grow to the sky forever, though. Look for this massive divergence to begin to converge with XOM being a relative under-performer to the overall market over the next several months.

XOM stock is also getting extended versus the price of crude oil. Since making a recent high around $125 in March, oil has fallen about 4% to close near $120. ExxonMobil shares, however, have risen over 12% in that same time frame. XOM went from $88 to $99 even though oil prices dropped from $125 to $120.

Yet another reason the rally in XOM stock may be nearing an end.

Trying to pick the exact top in any stock, let alone oil stocks, is an art, not a science. Plus, there is the old market adage that stocks that trade at $90 will almost always hit $100. Given that XOM is now trading over $99, most of that benefit has already been reaped.

While shorting XOM stock makes sense, it can be expensive from a margin standpoint. Plus, XOM pays has a 3.6% dividend yield which you would be on the hook for if you shorted the stock.

Luckily, the options market provides a very viable alternative-buying puts. Given that implied volatility (IV) is only at the 34th percentile, it means option prices are comparatively cheap. They are even cheaper when compared to the actual, or historic volatility (HV) of 69%. 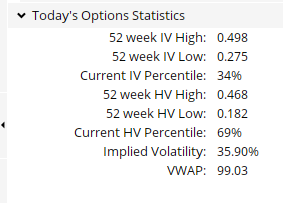 You can define you risk up front while still having the ability to make out-sized gains. While risk management is always a vital element of trading, it has become even more important recently.

Traders looking to short an over-valued, overbought and overloved XOM stock may want to consider buying cheap put options to put the probabilities in your favor. At the end of the day, trading is all about probabilities and not certainty.

This is the type of trade methodology and option strategy we employ day in and day out in the POWR Options portfolio.

What To Do Next?

If you’re looking for the best options trades for today’s market, you should check out our latest presentation How to Trade Options with the POWR Ratings. Here we show you how to consistently find the top options trades, while minimizing risk.

If that appeals to you, and you want to learn more about this powerful new options strategy, then click below to get access to this timely investment presentation now:

How to Trade Options with the POWR Ratings

About the Author: Tim Biggam

Tim spent 13 years as Chief Options Strategist at Man Securities in Chicago, 4 years as Lead Options Strategist at ThinkorSwim and 3 years as a Market Maker for First Options in Chicago. He makes regular appearances on Bloomberg TV and is a weekly contributor to the TD Ameritrade Network “Morning Trade Live”. His overriding passion is to make the complex world of options more understandable and therefore more useful to the everyday trader. Tim is the editor of the POWR Options newsletter. Learn more about Tim’s background, along with links to his most recent articles.

The post 5 Reasons Why It’s Finally The Time To Sell Big Oil appeared first on StockNews.com