What began as a casual conversation between two friends over shared interests and an appreciation for letting the good times (and a few glasses of Reposado) roll sparked the inception of a tequila brand thats taken the spirits world by storm and become a pop culture phenomenon in its three short years on the market.

Villa One Tequila was launched by Nick Jonas and John Varvatos during the summer of 2019 in an attempt to create a tequila brand that was the best in its class and a true expression of what both men cared passionately about: bringing people together as often and as effortlessly as possible.

Jonas and Varvatos are two instantly recognizable names, whether you were a longtime Jonas Brothers fan and have been riding the wave since the early 2000s or a seasoned fashion maven whose admired and styled the sophisticated yet timeless cuts of a John Varvatos garment.

But tequila was, and admittedly still somewhat is, a technical departure from the two expertise mens’ respective areas of.

Yet the center point of the three industries — music, fashion and spirits — all lands on the mastery of three non-negotiable factors in order to succeed: creativity, connectivity and a really solid product.

“While it’s outside of the circles and realm that we usually operate in professionally, our experiences together, collaborating and finding a really good rhythm creatively, brought us to some amazing places and had great experiences and found that we both had a real love for tequila ,” Jonas tells me of the earliest stages of building out Villa One. “And when we were hanging out casually outside of work, we would share tequila and talk about life, creativity, the universe, all the things. I think that it was something we were really drawn to and always talked about — wanting to start our own brand and to learn more about it. of a stars aligning moment.”

To call Jonas and Varvatos perfectionists may not feel right; to call them experts at their respective crafts would seem to be an endorsement not high enough.

But if the two were going to set out and build Villa One from the ground up, they wanted to make sure that they were doing so with the utmost level of mastery and quality that they could find.

“In the end, it’s about having great products because without that, you can have the best packaging, the best marketing, the best celebrities, whatever it is that you’re tied to. But at the end, the product has to be incredible. , Varvatos asserts. “And that’s the thing that lives on. So whether it’s a song or garments, or whatever it is, it’s that thing that stays with you and that you come back to.”

So they tapped master distiller Arturo Fuentes, a three decade long reigning pro in the industry whose been dubbed as the “Godfather of Tequila”, to help create the most unique blend of tequila that they could, without skimping on quality or taste.

Villa One comes in three expressions — Silver, Añejo and Reposado — and uses a blend of earthy lowland agave and sweeter highland agave to create a spirit with a finish that can most simply be described as, well, extremely smooth.

“It’s not alcohol forward, it’s really quite smooth, and even in the Silver and the Añejo, has a nice body to it. Not overwhelmingly so, but some of those chocolate notes and caramel, things that for me as a fan of Reposado I just absolutely love,” Jonas describes of the Villa One product lineup. “I’m not overwhelmed by the vanilla flavor, which can often happen. I think it’s a really special blend, and we’re one of only two tequilas that does this. So really, when you look at how crowded this specific column of the spirits industry is, I think this is a real factor that kind of separates us. And once you try the Villa One up against any other tequila, I really feel like there’s no comparison.”

It’s quite clear to see that the men view the craft of their tequila as an art form, something that is nuanced in its creation from the ingredients down to the way that it’s created.

“We both enjoy tequila so much and I think that our thought was like, why can’t we do something that’s best in class,” Varvatos says. “We kind of look at everything else that we do in our lives as trying to raise the bar and be the best in the world that we play in so why couldn’t we do it in tequila as well?” 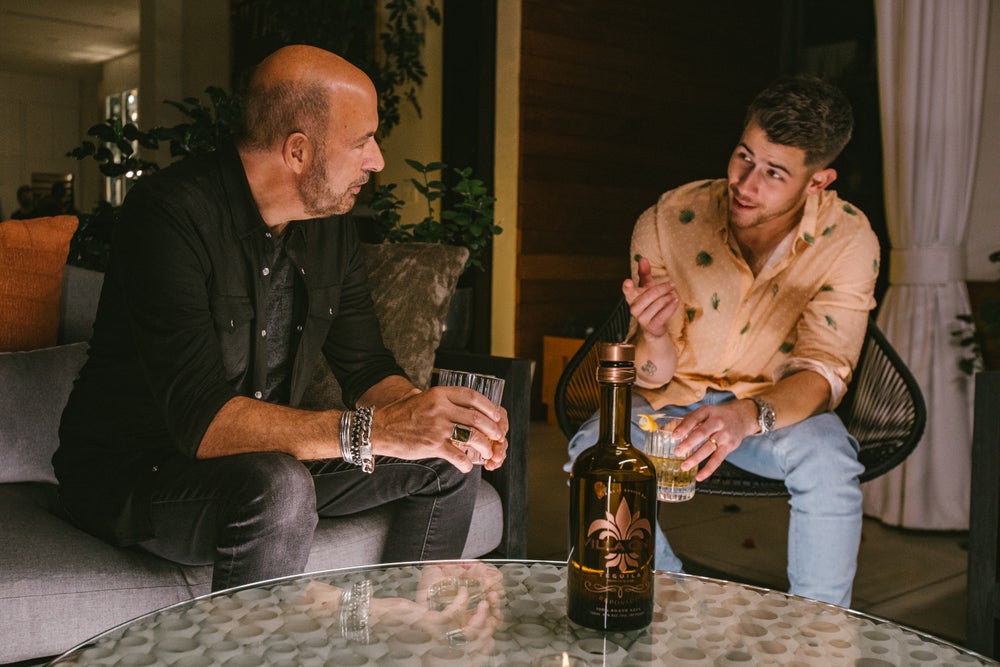 Part of this meant coming up with a brand concept that was simple to underrand yet authentic in its origin.

Enter Villa One’s famed tagline, “Life as it should be”, which was ironically lifted from a toast that Jonas gave during a vacation with Varvatos and friends down in Mexico.

“We were down in Cabo having this great life experience, just in real time — great people, great food, great music. And a toast was made, it was to ‘life as it should be,'” Jonas says. “And it’s just about that — moments where you’re with the people you love, and enjoy a glass tequila and taking it as a step back from the craziness of life, and just really being present. I think we tried to bring that to the essence and the identity as a brand, kind of in the marketing around it. But also post-COVID, or throughout COVID, I think we found a different way to see that. Seeing things in a new way and a different perspective is always important, and we had to adjust and kind of adapt in real time. they have with people they love.”

The true meaning of the line lies within the true mission of the brand — bringing people together through shared experience, good times and of course, doing so over some really great tequila.

The company’s latest endeavor, the Life As It Should Be Contest, aims to help bring people and consumers together in a tangible way by asking them what their “Villa One” is, what their happy place is that transforms them to somewhat of another dimension of tranquility and fufillment.

It’s a way for the company to take the concept of connectivity and community and put it into action — after all, the two grand prize winners of the contest will be treated to the vacation of their dreams.

“Early on in the infancy days, we were talking about what Villa One meant to us as we were developing in it. And that first time down in Mexico together, that special trip that we had and the night that the brand kind of came to life in our in our minds, and Nick made his toast, we started talking about to everybody, what is Villa One? , Varvatos explains to me. “And it could be the special beach chair that you have some place that you sit on a beach, or a cabin in the mountains, as we say, or Paris or just in your own apartment. That special place that you just like to hang And share those great moments together. So it really became about wanting to think about transporting ourselves and those places that did transport us.”

Villa one will also be launching the first-ever Villa One Tequila Gardens in San Diego, an immersive way for fans to sip on their favorite spirits and hang out amongst friends and soon-to-become friends all while, of course, Jonas curates the playlist.

Related: The Paradox of Celebrity Tequila

“We really look at this as not just a tequila brand, but a lifestyle in a lot of ways. And so to bring in an experience to the fans of Villa One, and people that just like to get out, have great food and be in a great environment,” Jonas says of the new initiative. “We’re really excited about … having it feel really authentic to the foundation and the roots of not only our Tequila, but all tequila, and leaning into that history, even just the cultural feel and beauty.”

The in-person activations and contests are a major win for a brand that faced the uphill challenge of launching right at the onslaught of the pandemic, something that limited customers from being able to live out their lives as they should be.

Traditional launches, events and tastes were out of the question during the earliest releases of Villa One; Imagining someone sitting out at a restaurant sipping a cocktail made with the tequila seemed like a far-off fantasy.

“We had no idea how important that message was really after living through the last couple of years, trying to get back to basics and getting back to somewhat of a normal life and enjoying those special moments again,” Varvatos admits.

But Villa One has shown no sign of slowing down, in fact Jonas will maintain that the pandemic and its complications gave the brand the “fire” that they needed to keep innovating and pushing through.

And of course, the two friends and business partners have used each other as each other’s guiding forces through the ever-unpredictable industry that is spirits and the ever-changing world that is owning a business.

Because aside from having a strong level of creativity, connectivity and a really solid product, having a partner who is as much of an inspiration as they are a friend is just the lime squeeze in the margarita.

“You want to be around people that you’re learning from as well; the partnership is inot one dimensional, it’s multi dimensional and with Nick, I always feel like I’m learning something from him,” Varvatos tells me. “He never wants to be a follower with anything, it’s all about leading and that’s kind of the stamp of a winner and that’s how I look at Nick —he’s a real winner at whatever he puts his mind to be successful with.”

Jonas would be inclined to agree when it comes to his admiration for Varvatos.

“I think I’ve always admired John’s passion and attention to detail. I think that obviously he’s a brilliant creative, but also his business sense is a huge asset and has been relationally for us,” Jonas tells me. “But also as partners and friends, I think you always have to lean on that person and really trust in them and their strengths and look at how you can add value to each other every step of the way. With John, this has felt like a real exciting journey and a fun one to be on.”

Varvatos will tell you that the “magic is in the bottle” when it comes to Villa One, but when it comes to the way that the two are able to take their own friendship and level of connectivity and build a brand around that feeling of community , commonality and a dedication to the good times in life, it’s clear that the magic here goes far beyond what you’ll find at the bottom of your (hopefully empty) glass.